This tiny floral cross pendant has a genuine tsavorite crystal. Yet it is inexpensive since the crystal is raw and not transparent. I have polished it just a bit to fit into the bezel.

A chain is not included, Can be delivered as an option (+10-20 euro). Please contact me.

Would you like to see another green garnet (uvarovite)? Found in Russia only.

Garnets come in many varieties and colors. The first discovered garnets were red: almandine, pyrope.
Later, green garnet varieties like demantoid, grossular and uvarovite were found in Russia.

The grossular has been first found in 1790 in Siberia, in the same region, where this stone comes from, in the basin of the river Vilui. The founder wanted to give the mineral the name of “Viluite”, but 20 years later a better name was given. “Grossular”, derived from the botanical name for the gooseberry, grossularia.

Technically the difference between tsavorite and grossular is that tsavorite is a member of the grossular family, bright green in color. High-quality grossular/tsavorite can get very expensive. 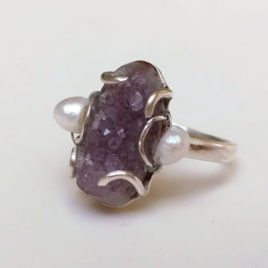