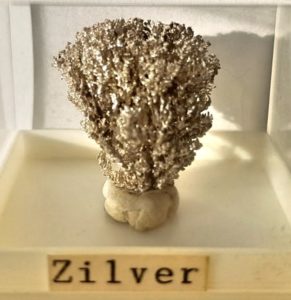 The English name for silver has a Germanic root silubra. Metal’s Latin name is argentum, origination from Greekarguros which means “shiny white”. This is where abbreviation Ag comes from.
Silver is found in native form, as an alloy with gold (electrum), and in ores containing sulfur (argentite or Ag2S), arsenic, antimony or chlorine. The principal sources of silver are the ores of copper, copper-nickel, lead, and lead-zinc. Silver is found in Mexico, Peru, China, Chili, Australia, the USA and Canada. There are also some European silver sources, like those in Poland, Czech republic and Italy.
Today the metal is primarily produced as a byproduct of electrolytic refining of copper, gold, nickel, and zinc as well as by recycling.
Silver has been used historically in currency coins, jewellery, ornaments, tableware and utensils (hence the term silverware). Modern silver applications are: solar panels, water filtration, electrical contacts and conductors, mirrors, window coatings, photographic film and X-rays. Dilute silver nitrate solutions and other silver compounds are used as disinfectants and microbiocides.For ages people used pure silver coins to disinfect water.

With Mohs hardness of 2,5-3 silver a soft metal. It is as hard (or soft) as a fingernail. As a metal it has the highest electrical and thermal conductivity. Another interesting property is its high reflectivity (of visible light spectrum, not UV). The metal has also high ductility: from 1 gram silver a 2 km long silver wire can be stretched. The color, the softness, the ductility and the high gloss make silver perfect material for jewellery.

Silver is associated with the moon, the sea and water in general and with different gods and goddesses. Silver’s alchemic sigil (used even at the modern stock exchange) is crescent moon. The alchemists used to call the metal Luna.
The silver-moon association is based on one of the main properties of silver – its reflectivity. Like the Moon silver reflects light. It is a metal which requires darkness for its reactions like a photographer needs darkness in his studio to work with this metal. Another reason for the Moon-silver connection is probably the fact that gold and silver have always formed a “Sun-Moon” combo in history, with the Sun being gold and the Moon being silver.

In the gold-silver pair silver is always second, like silver medal represents the second place and gold medal – the first. Compared to gold silver is less pure and less rare. Silver coins have always been less expensive ones.  It is interesting that some languages have chosen “gold”  for the word “money”. Such as “geld” in German and Dutch. And other have chosen silver, for instance, French: “l’argent” and Spanish: “plata”. In modern silver coins silver has been replaced by nickel.

n 2018 the gold to silver ratio is 82. It means you need 82 troy ounces of silver to buy just one ounce of gold. This is a quite high ratio. Meaning silver is relatively cheap and gold is relatively expensive. The current price of silver equates to approximately 1/64 the price of gold. The ratio has varied from 1/15 to 1/100 in the past 100 years. There is a certain discrepancy between the prices of these two metals. The fair rate should be somewhere near 1/10. In 1980, the silver price rose to a peak for modern times of US$49.45 per troy ounce due to market manipulation of brothers Hunt. At that time the gold/silver rate was 1/3!

Experts think that the ratio of 1/82 will not stay forever. With the current level of demand, silver reserves on Earth will be depleted by 2034. While the gold deposits will end about by 2060. It means that the price of silver could catch up with the price of gold in the nearest future. Who knows, maybe silver will become an interesting investment object?