In the beginning I found soldering very difficult. The process looked so easy in these great You Tube tutorials: How to solder silver jewelry and Soldering metal clay with Tim McCreight. Of course, the easiest skill is the one you have mastered. My first experience was far from being easy.

The first problem was the  false “flux bond”. The pieces were held together not by solder but by hardened flux. It was so misleading: at a first glance the bond looked hard but as soon as I started setting a stone or polishing the piece with the rotating tool, it fell apart. It was very frustrating having hours of work lost, especially when a stone had been set and the piece had been polished. Later I learned how to distinguish the soldered bond from the flux bond: the contact felt different, but also pickling or soaking in boiling water made the flux dissolve and reveal the true nature of the bond.

Another problem were scorched pieces. Very often, when soldering a wire to a plate, I found the wire melted before the solder did melt. That was even more frustrating than incomplete soldering.

After some time I learned that soldering is quite a controllable process, which goes fully in conformity with the laws of physics. It is true what they say in the tutorials: there are 3 key factors to successful soldering, the GHL-factors: the contact must be Gap-less, the temperature must be High enough, and the Larger piece has to be warmed most.

Here are some of my soldering silver tips:

Of all three factors the temperature is least controllable if you use a butane hand torch. Very often it does not produce enough heat. Silver is known for its high thermal conductivity. I learned that even a current of fresh air coming from an open window can cool a piece, preventing it from reaching the required temperature. As well as holding the piece with tweezers: the larger the tweezers the more heat they take away from silver. So how can you hold a pin on a plate and generate enough heat for the plate to make the solder melt? My simple solution was building a “fire wall” from two bricks used for soldering: the chamotte brick and the charcoal brick. As you see on the picture below, the wall can both support the pins and conserve the heat. Thus two requirements can be met at a time: maintaining the contact and the temperature. And the third requirement – heating the plate, not the pins – is literally in your hand. 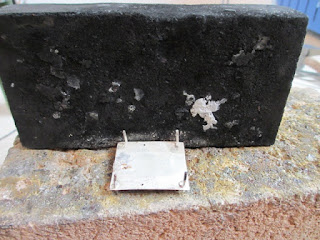 Next time another soldering lesson learned.