This beautiful Artisan Tree of Life Pendant was handcrafted from 925 and 999 Silver.

The artisan Tree of Life Pendant features the an uplifting tree with its roots in symmetry with each other. A simple yet timeless design. It measures approx 25×25 mm (1 and 1/4 inches tall by 1 inch wide).

The tree trunk has been fused from 925 silver scraps. The canopy has been shaped from PMC (999 silver).

Trees and leaves are a common theme in my work, and the tree of life is one of my favorites because of its beautiful symbolism. The tree shape reminds of a beech tree: tall and sturdy. So is this Artisan Tree of Life Pendant. Quite a heavy piece of silver.

Each piece is completely handmade by me in my little workshop. From the melting of the Silver, the designing of the piece to the final work on precious metal, all steps are executed with great care to create your jewel. I believe the energy you put into the process stays with the piece, so my table is my place of Zen.

Chain not included, can be delivered as an extra option

More floral jewellery in my shop

The concept of a tree of life has been used in biology, religion, philosophy, and mythology. A tree of life is a common motif in various world theologies, mythologies, and philosophies. It alludes to the interconnection of all life on our planet and serves as a metaphor for common descent in the evolutionary sense. The term tree of life may also be used as a synonym for sacred tree.[1]

The tree of knowledge, connecting to heaven and the underworld, and the tree of life, connecting all forms of creation, are both forms of the world tree or cosmic tree, according to the Encyclopædia Britannica,[2] and are portrayed in various religions and philosophies as the same tree.

The Bo tree, also called Bodhi tree, according to Buddhist tradition, is the pipal (Ficus religiosa) under which the Buddha sat when he attained Enlightenment (Bodhi) at Bodh Gaya (near Gaya, west-central Bihar state, India). A living pipal at Anuradhapura, Ceylon (now Sri Lanka), is said to have grown from a cutting from the Bo tree sent to that city by King Ashoka in the 3rd century BCE.[12]

According to Tibetan tradition when Buddha went to the holy Lake Manasorovar along with 500 monks, he took with him the energy of Prayaga Raj. Upon his arrival, he installed the energy of Prayaga Raj near Lake Manasorovar, at a place now known as Prayang. Then he planted the seed of this eternal banyan tree next to Mt. Kailash on a mountain known as the “Palace of Medicine Buddha

In Germanic paganism, trees played (and, in the form of reconstructive Heathenry and Germanic Neopaganism, continue to play) a prominent role, appearing in various aspects of surviving texts and possibly in the name of gods.

The tree of life appears in Norse religion as Yggdrasil, the world tree, a massive tree (sometimes considered a yew or ash tree) with extensive lore surrounding it. Perhaps related to Yggdrasil, accounts have survived of Germanic Tribes’ honouring sacred trees within their societies. Examples include Thor’s Oak, sacred groves, the Sacred tree at Uppsala, and the wooden Irminsul pillar. In Norse Mythology, the apples from Iðunn’s ash box provide immortality for the gods.

The Eternal Banyan Tree (Akshaya Vata) is located on the bank of the Yamuna inside the courtyard of Allahabad Fort near the confluence of the Yamuna and Ganga Rivers in Allahabad. The eternal and divine nature of this tree has been documented at length in the scriptures.[citation needed]

During the cyclic destruction of creation when the whole earth was enveloped by waters, akshaya vata remained unaffected. It is on the leaves of this tree that Lord Krishna rested in the form of a baby when land was no longer visible. And it is here that the immortal sage, Markandeya, received the cosmic vision of the Lord. It is under this tree that Buddha meditates eternally. Legend also has it that the Bodi tree at Gaya is a manifestation of this tree. 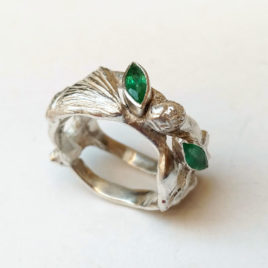