A sturdy massive sterling silver ring, adjustable grom size 8 (18) upwards to 10,5 (21). The ring will be left open, but since the sterling band is so strong, it can keep the desired size. It sits tightly and comfortably.

The green amazonite is originating from the Urals mountains in Russia. Amazonite varies in color from pale blue and green to deep turquoise. The Russian amazonite has a nice pattern and very deep green color (the Brazilian is more pale blueish).
The belomorite comes from Russia too, from the Kola peninsula in the North. It is a variety of moonstone, found almost exclusively in Russia.

Being solid and massive this double stone ring would make a perfect cocktail ring.

***
Belomorite is a Russian gemstone found on the shores of the White Sea. Belyi means ‘white’. It is quite rare as compared to other moonstone varieties. As all moonstones it stimulates imagination and creativity, but being found so high in the north it is ‘the coolest’ stone which acts very gently without destabilizing the nervous system.

Amazonite is quite a rare mineral. Though it is named after the Amazon river, it was formerly obtained almost exclusively from the Southern Urals, Russia.

Being a Feldspar it is soft and has layers. It ranges in hue from bright green to turquoise, and can be translucent to opaque. It has a vitreous luster and iridescence throughout the stone. When polished amazonite resembles finely cracked or spider-webbed marble. So the small crevices you see on a picture (10 times the real size) are natural to the stone.

Amazonite has been used in jewelry and stone carvings since the time of the early Mesopotamian cultures. Well-known in India, Egypt, Sudan and Mesopotamia, it was a popular amulet stone and was once used as decorative material for building facades. It was carved and cut into tablets for the Egyptian funerary text, Book of the Dead, and an Amazonite scarab ring was found among Tutankhamen’s treasures. It was believed to be the third stone in the breastplate of the Jewish High Priest.

As a powerful talisman of healing and prosperity, Amazonite enhances self-empowerment. It inspires truth, sincerity, honor, self-love, courage, communication, eloquence, integrity, trust, clairvoyance, clarity, prophecy & openness. It can help unlock psychic vision, in analyzing & sorting out information with intuitive wisdom, to manifest & retain Universal Love, to increase faith & foster self-discovery. It carries a soothing energy that cleanses stagnancy & negativity so you can spread your wings & accomplish all you are meant to. 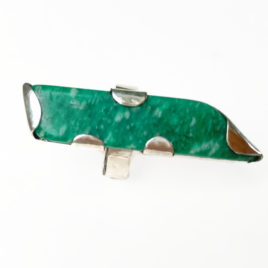