A nice and funny example of custom jewellery design.

A couple of months ago I made this Egyptian cat, wrapped in a crescent moon-shape around a mysterious fluorite stone. After it was put on sale I received a message from a French lady with a  question: could you transform the cat into a giraffe? And, please, make it a large pendant with an extra large bail.
At first I thought it was some kind of a joke. What do these animals have in common? A round-shaped, flexible feline and a large, quite angular ruminant? 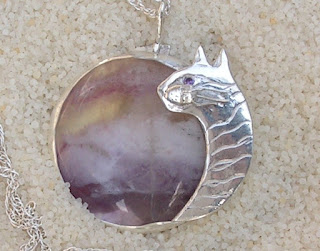 After giving it a second thought, I saw some things in common. A giraffe is a big, but still very elegant animal. One of the distinguishing characteristics of the giraffe is its long neck, which also can be wrapped around a stone in a half-moon shape. Giraffe browses the crowns of trees in search for juicy leaves, so why not make a bail in a shape of a branch, with some leaves hanging from it. 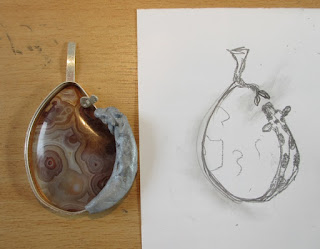 The jasper stone, which the French lady sent me, was perfect for the purpose: the pattern, the color and even the shape with one side “cut off’, everything was suggestive, helping me to form an image, first on paper, then in polymer clay, and, at last in papier-mâché.
The papier-mâché form was a bit over-sized to allow for the shrinkage, and of course, it was very rough. 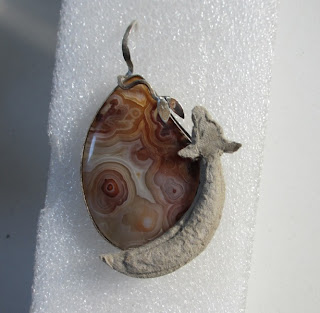 The customer was happy with the general lay-out but a bit worried about the fine details. What makes a giraffe a giraffe, besides the long neck? The spotted coat pattern, the horns, the mane, the ears, the nostrils, and last but not least these large, a bit sad “Bambie” eyes with long eyelashes. 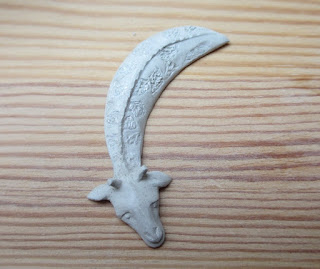 Fortunately, precious metal clay allows to reproduce all these details. The eyelashes are maybe somewhat difficult, so I decided just to indicate them. It is interesting how the position of the eyes can change the total facial expression, making someone look kind, sad, cheerful or angry. I know from experience that wide-set eyes with slightly slanted outer eye-hooks are especially appealing: in humans and in animals. After sanding and polishing the giraffe was fired, polished and slightly oxidized to highlight the head and make the spots more pronounced. And here it is. A giraffe, transformed from a cat. It’s been quite a challenge. But I learned from it that all animals are elegant in their own way, and each animal has something which makes it suitable for a jewelry piece.