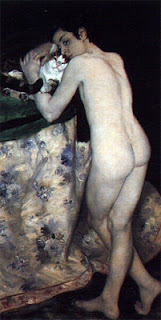 Collecting pictures for a Pinterest board can lead to interesting discoveries. You can discover a lot about your own taste, but also about the things you like.
Pinning items for my first board White Cat Art  I browsed hundreds of cat paintings, from Renaissance to contemporary Art. The way the cats are featured in art works tells a lot about the cat and his image in human society. Many cats are depicted in their natural state – solitary and independent, engaged in typical feline activities such as resting, stalking prey of washing themselves. There are also lots of scenes featuring cute kittens, playing with their mothers, siblings and other animals. The third popular theme – the relationship between cats and humans – is represented mainly by portraits of children and (young) women holding cats, very often in a Madonna-like embrace. Occasionally cats make part of an everyday life scene. But men and cats in art works are scarce. The Young Boy with Cat by Auguste Renoir is one of the few exceptions. However the boy’s tenderness, accentuated by his nakedness, the soft look in his eyes and protectiveness towards the cat could be as well considered feminine. One can also argue that this is a boy, not a man yet. 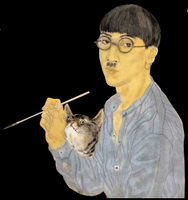 Another example of pictures showing men with cats are autoportraits of artists themselves. For instance this Self-portrait by Leonard Tsugouharu Foujita, a Japanese painter and printmaker who applied Japanese ink techniques to Western style paintings. Foujita was quite an interesting personality: at the age of 27 he went to France, where he became friends with Picasso, Matisse, Soutine and other artists, he was married several times, he converted to Catholicism at the age of 73 … and he adored cats. 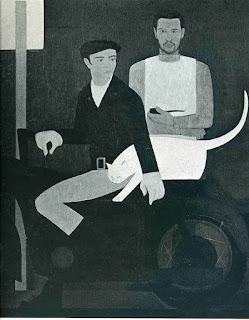 Exploring cat art further I found another cat-loving artist – a more than 100 year-old American painter Will Barnet. He created lots of amazing pictures with cats and about cats. But one of his works is really unique in its concept and presentation.
The Three Brothers dating from 1964 shows two men and a white cat. The colors are black-and-white, the shapes are clear-cut, the men’s faces are serious and their attitude towards the cat is far from fondling or protective. The cat is neither cuddled nor patted, it is just accepted into the  ‘men’s world’ as much as the other attributes like the pipe and the bike. The cat is a member of the ‘Brotherhood of men’ and that makes this picture so special.

It could be a cliche that women prefer cats and men prefer dogs, but it is also true, to some extent. Recently a research has been published exploring the reasons for the special bond between cats and women. Many typically feline features, for instance the softness of the cat’s fur and his unpredictable character, have been associated with femininity. It could also be the cat-baby similarities such as the size of the cat’s body and his vocalization, which make many women treat their cats as their ‘babies’.
However men also have a ‘feminine side’, and the more secure the man is of himself and his masculinity, the less afraid he is to exhibit his femininity. This inspired my second pin collection – Great men, great cats  featuring pictures of famous men with their cats. From Lenin to Lennon, generals, artists, writers, politicians, all of them cat lovers pur sang. Men and cats in art.
Could it be that love for cats is a reflection of femininity in men?
Real men are not afraid of their feminine side. Real men love cats.