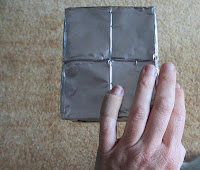 Firing is probably the most exciting part of working with PMC Pro. It’s where a special firing procedure comes in: firing in a container filled with activated carbon. When ordering my first PMC Pro pack from Cool Tools, I bought this Firing Kit. And the first thing to do was to make the container. As you see, they do not warn for nothing about the sharp edges of the foil: keep the finger plaster at hand! But the biggest pain in the neck was the folding. Just forget the manual and watch the video, which leads you step-by-step through this complicated procedure. At least, I found it quite complicated, and my edges were never as ‘crisp’ as produced by the lady on the video. But actually it does not matter as long as the lid fits onto the box. 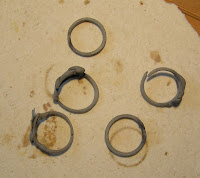 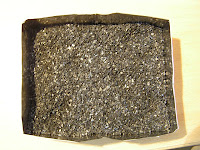 Since I had some combustible elements, I chose the two-step firing procedure. It means that the step one, intended to burn out the combustible material, takes place on the open shelf at a temperature of 538 degrees Celsius for 30 minutes. I was quite surprised to see the pieces virtually unchanged after this step (see picture on the left). So I proceeded to the next firing step – buried them under the carbon layer according to the instruction and put them into the kiln for 1 hour at a temperature of 760 degrees.
It’s true what they advertise at Cool Tools. The container leaves absolutely no flakes or other mess in the kiln. The kiln remains perfectly clean. Following the instruction I let the kiln cool down to 300 degrees, then took out the container and let it cool down further.
The firing result was quite satisfactory – apart from small cracks. The cracks are not caused by firing, but by the shrinkage of the clay around the hard objects, such as gemstones. I tried to repair them with the PMC Pro slip (with a bit of oil added) and re-fire them in the same conditions, but it did not work. The fired PMC Pro just peeled off! And then…I decided to do something which is not advised in the manual. I grabbed my good old friend – Art Clay Silver Oil paste. Contrary to the instructions that it should be fired at least at 800 degrees Celsius, it did it quite well at 770 degrees too! And it did not peel off even after brushing with a steel brush, polishing and burnishing with all kinds of discs. So, this table has been adjusted. I discovered that Art Clay Silver Oil Paste CAN be used, and PMC Pro CAN NOT be used for repairing micro-cracks in PMC Pro jewelry pieces.
After the final firing the pieces have been polished and some of them – oxidized, using the standard procedure. You can see that PMC Pro is hard, the soft polishing discs get really “eaten up”. On the other hand, the steel brush does polish very well and does not wear off that fast.

So you see here some rings made of PMC Pro. They fit nicely and are definitely stronger than the regular PMC3 rings. The shrinkage has been approximately 4 US Sizes. The only minor negative detail is the smell – they do smell a bit like copper. I think the experiment has been quite successful and I am certainly going to use this material in the future.