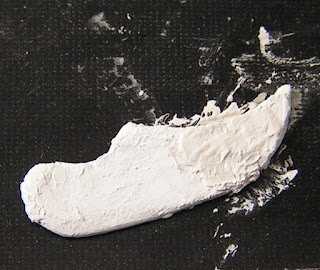 The shining sun gave me the courage to do something I postponed for a long time. Yesterday I opened my 50 g pack of Art Clay Silver (aka ACS). I postponed it because I don’t like this material preferring its alternative, the Precious Metal Clay (PMC), the original silver clay made by Mitsubishi. The reasons for my preference are multiple and deserve a separate blog. The main problem with ACS is its fragility in dry state limiting the freedom of application. Even the simplest and flattest pieces run a high risk of breaking during filing or sanding. This cat paw did break. I admit that it’s only 2 playing cards thick, but I used PMC in exactly the same situation and it was just fine.

The recommended way to deal with breakage of silver clay pieces is to moisten the contact surfaces, press them towards each other and smear a layer of silver clay paste over the ‘weld’. Basically following the same logic as with gluing, only using water and clay paste instead of the glue.
After trying this several times I discovered that it does not work, The paw kept breaking. In spite of the perfect contact between the surfaces they were too dry to stick together and the paste layer was too thin for a good bond. So I gave up the idea of the ‘perfect weld’.. Instead of it I inserted a thick layer of paste between the pieces and covered the contact area with paste too. It looks a bit rough and I will have to polish it later (very carefully). But it holds.

This experience has inspired the following philosophical conclusion. If you want to mend anything which is broken, like a relationship, don’t glue the broken pieces together, but build it up anew. Keep the contact surfaces soft and moist and use some extra padding. It will look rough in the beginning but it can always be polished later when the bond is strong enough.

A wise lesson about shaping pmc.